Presentation of the book by M. Papadopoulos "Arise, Rossiya: The Return of Russia to World Politics"

Dr. Markus Papadopoulos – founder and editor-in-chief of Politics First magazine, a leading expert on Russia, often appears on the pages and screens of Sky News, BBC News, RT, Al Jazeera, Press TV and Al Mayadeen as an analyst on the current situation in Russia. His scholarly work on Russophobia and his speech in the House of Lords on the origins of the current tensions between America and Russia have received widespread media coverage (Dr Marcus Papadopoulos took questions at the House of Lords on Russia - YouTube). Markus Papadopoulos is member of the Press Gallery of the UK Parliament as the publisher and editor of Politics First.

The discussion was also attended by:

- Fyodor Lukyanov, Editor-in-chief of the journal "Russia in Global Politics", Chairman of the Presidium of the Council for Foreign and Defense Policy of Russia since 2012, Director of Scientific work at the International Discussion Club "Valdai", Research Professor at the Higher School of Economics;

- Pavel Koshkin, Researcher at the Institute of the USA and Canada of the Russian Academy of Sciences, expert of the Russian Council on International Affairs;

- Neil Kent, Professor at the University of Cambridge (Scott Polar Research Institute), Professor at the St. Petersburg State Academic Institute of Painting, Sculpture and Architecture named after I. E. Repin, author of numerous works on the history of Russia; 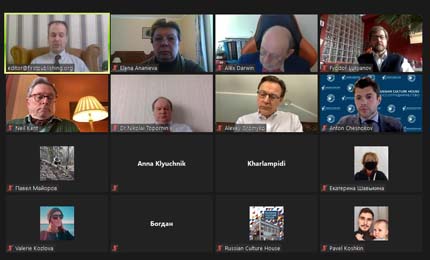