The event was held in the Kayser Auditorium in Hankamer Academic Center and was open to the public. “[We have] a problem of global persecution and global discrimination of Christians in different countries of the world,” Lunkin said.

Lunkin’s presentation mainly focused on the role that religion plays in Russian politics and society. He previously served as a part of the Keston team in Russia. The Keston Institute specializes in the study of all religions and forms of religious expression in current and former soviet countries, according to the organization’s website. The Keston Institute’s collection is housed in the Keston Center for Religion, Politics and Society at Baylor.

Lunkin said that in 2009, Russian President Vladimir Putin used the church to orchestrate a campaign against Jehovah’s Witnesses, the fourth largest religious group in Russia.

“I always worry when government and religion in a nation are joined at the hip. Religion can be a power for great good and, as we’ve learned from human history, a power for wrong,” said former U.S. Congressman and panelist, Chet Edwards. “What I hope Americans can learn more about [is] limitations on religious liberty in Russia. Putin has gained more power. I think it will remind us [of] the importance of protecting religious liberty by keeping government out of our houses of worship.”

Lunkin’s presentation illustrated how deeply entwined church and state are in Russia. His research found that religious life in Russia could be an example of the most democratic and authoritarian way of life, in terms of building a community and facilitating community activities, according to Lunkin’s presentation. The research also found that there is an uprising of democracy in evangelical communities, Lunkin said.

However, this surge of democracy is not greeted with enthusiasm by all. Lunkin said that the Patriarch of the Orthodox Church is openly anti-democratic, but supports democracy in countries other than Russia.

“I feel called to be a missionary on Russia and I’ve been really curious about the new anti-extremism laws that have been passed this [last] summer, and Russia’s response to them [and] how much they are enforced. Dr. Lunkin was very informative,” said Sherman freshman and event attendee, Meribeth Phillips.

Lunkin’s presentation was followed by a panel. Edwards, Xenia Dennen of the Keston Institute in Oxford and Dr. Sergiy Kudelia, Baylor assistant professor in the department of political science, shared their thoughts on the presentation. Lunkin and the panelists took questions from the audience regarding theology, history and the church-state relationship in Russia. Wallace Daniel, Mercer University professor in the department of history, moderated the panel. 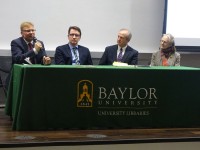 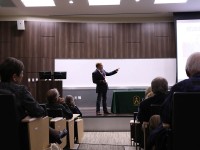